When walking through the Ooidonkdreef, you’ll first come across the church Our Lady and Saint-John, which is a registered monument since 2014. At the north side-altar you can find the founder’s stone of Baron t’Kint de Roodenbeke from 1885. The church was built at the same place as an older one. It has a basilical affinity to the neo-gothic style. The architect is A. Van Assche, who also designed the Church of Our Lady and the Albert Saverijspand-house in Deinze. The neo-gothic furniture was mostly donated by the noble family. Edging the quire lies the chapel of the count, with its own entrance and tomb. 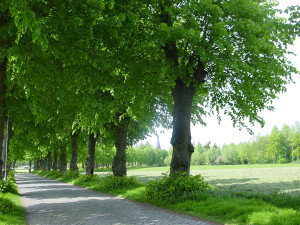 Further along the road, you’ll see the chaplain house or ‘Kapelanij’, also called Little Ooidonk, which is protected since 1995. This farm was already mentioned in 1400 as loan to the Land of Nevele. Since 1638, it was rented to the chaplain of the castle, and so it became the residence of the Norbertines from Drongen. The red and white painted hatches indicated the dependence to the castle.

As you get closer to the castle, you’ll pass the farming establishment on the estate at Reables. This came into existence because of the initiative of the della Faille family in the beginning of the 17th century. This farm is still a part of the domain of Ooidonk. 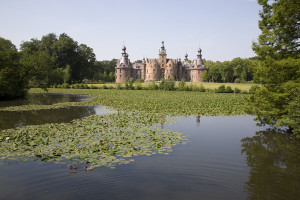 After the long and pretty Oude Lindendreef you’ll reach the particularly beautiful castle where the Count of Hoorn lived. He was entwined in city conflicts, in the 14th and 15th century, and religious wars in the 16th century. The castle got its current looks in approximately the year 1595 thanks to Maarten della Faille. Around 1870 the castle was adapted to fit the ‘modern life’ and from 1958 the castle was open to the public. Ooidonk is described as one of the most beautiful castles of the country and as a jewel of the Flemish-Spanish 16th century architecture. The outside view of the castle, with its many towers, chimneys and stepped gables, recalls the image of the French Loire-castles like the one in Chambord. The interior gives the visitors the possibility to come into contact with rare pieces of furniture, historical objects, tapestries and unique collections. All of the owners, among them the current Count, Henry t’Kint de Roodenbeke, have always tried to do their utmost to preserve the countryside view around the domain. The park measures 45 hectare and is certainly worth a visit.

Ooidonk Castle is also available for events. In this impressive historic setting, you and your guests can enjoy a dinner, walking dinner, reception, etc. …..