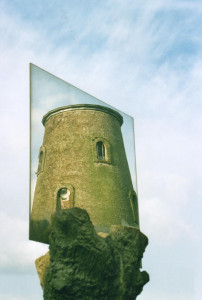 Opposite to the square Roger Raveel‘s  ‘The New Vision’ in Machelen, you will be able to see the Hostens Grain Windmill, dating back tot 1839 and protected since 1999. This mill was orginally used as a grain windmill, but was later used as mill tot produce oil until 1944. The name originated from the brewer Livien Hosten himself.