Behind an elegantly forged fence, a stately manor can be found. Built in 1842 by Justin Levrau and later adapted by doctor Alfons De Backer, whom was the first doctor to settle in Zulte/Machelen. It also served as the birth house and actual living place of his son Roger De Backer (°1879 – †1984), whom later became known as a Lys-painter. The decorated wall stands in contrast to the simple village houses. 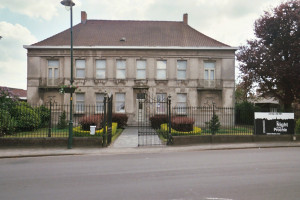