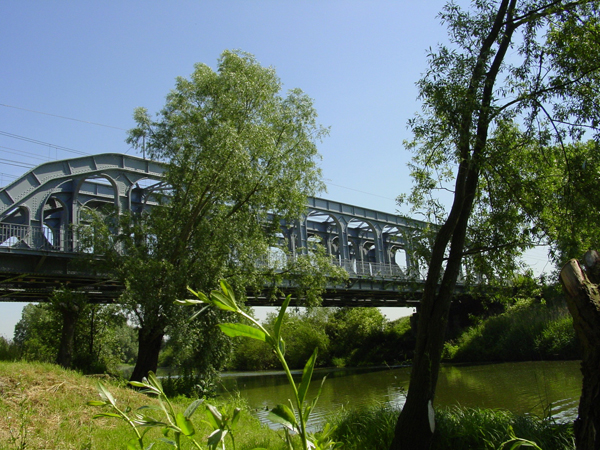 When walking alongside the old Lys-arm in Deinze/Grammene (part of the Lys that was cut), you’ll see the noteworthy railway bridge built in 1855 on the line Deinze-Tielt-Adinkerke. This bridge is one of the few remaining Vierendeel bridges, named after the engineer A. Vierendeel (°1852 – †1940). It consists of some craftsmanship of iron beams, without diagonal connections. Over 80.000 nails hold the 410 to 820 tonnes bridge pieces together. Multiple times have people taken action to preserve the bridge and the old Lys-arm as did for example the artist from Machelen, Roger Raveel and Laurent Vanhaesebroeck from Grammene. If the Lys-arm will remain or not, after the straighten out of the ‘new’ Lys, was also part of the conflicts. When the company ‘Waterwegen en Zeekanaal NV’ wanted to fill up the Lys-arm, a protest group was born out of local people and the artists. Luckily, the protest group was able to stop the filling from ever taking place. In 2001 the bridge was renovated.