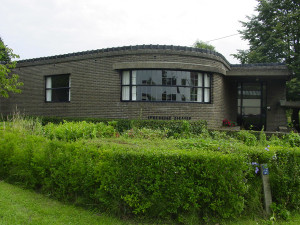 On both sides of the road from Ghent to Courtrai, in Deinze/Astene, Dr. Martens had a polyclinic/outpatients clinic and residence built in the year 1932, by Henry van de Velde in the style of ‘Nieuwe Zakelijkheid’ (new objectivity). The clinic was one of the first and only private clinics in the area back then. Under a flat roof, decorated with ceramic tiles, the building is L-shaped. It was protected as a monument since October 5th, 1994. The sober and rational interior are just as important as the exterior. The rooms have been efficiently arranged. The Grantino floorpatern is divided into geometrical figures, designed by the workers of Henry van de Velde. The metal furniture, the desk, the built-in library, the filing cabinets and the counter were all built by the assistant-workers of Henry van de Velde. Even the smallest details like doorknobes, switches and even sanitary appliances were kept in the current day private residence. With the residence ‘Villa Landing’ on the opposite side of the road, the architect wanted to create a contrast between cemented walls and curving lines in concrete and bricks and the overhanging crown frame. The restaurant ‘Au Bain Marie’ invites you with culinary deliciousness.