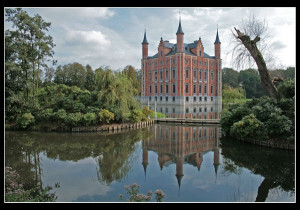 Olsene Castle is situated along the ‘Grote Steenweg’ in Zulte/Olsene. The two spanish style pavilions are clearly visible from the road and provide access to the domain. Behind that, you’ll find the water castle. Originally, another castle was built in this very same spot, but in 1854 the castle was rebuilt in a flemish neo-renaissance style by Baron and Baroness Polydore Piers de Raveschoot-Surmont de Volsberghe. The designer was the know Ghent architect Louis Minard. The castle is built in the middle of the water and has a nice stone bridge at the front. The complete structure contains a wall with on the inside a little square with open space and stables, a kennel, a walled vegetable garden, an ice cellar and a lovely park. 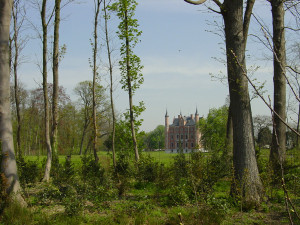